This was my first race as a race promoter....hmmm where to begin?

5am-make coffee, wait, downtown KFalls experienced a blackout, no alarm clock, no automatic coffee brewing!
6am wake up because German Shepard is hungry, freak out because no coffee made for my volunteers, i'm supposed to be setting up the course with Zach and Jake....UGHHHHH!
6:30 am, Jake and Zach leave me to get all of the registration, raffle prizes, awards, and get my 5yr old ready, who tells me she is sick, then throws up her cough med....ughhhhh....
7am, suppose to be at the park setting up, instead, bathing daughter who has cough medicine all over her ...

8:15?....set up, register racers.....people are actually coming to my race!!! my volunteers show up, my friends show up to take pictures, racers show up to race!

Given that cyclocross is new to Kfalls, i.e. no one know what it is, i think i have recited the history of cylcocross where i am dreaming of Belgium circa early 1900's....and trying to explain that people really do like racing in the mud, cold, snow, ice....(not because they have to...)

There was definitely the regular S.OR Outlaw racers that loyally showed up for my inaugural race (thanks Richard, Vern, Joe, Kristi, Brian, Scott, Dave G, and about 1/2? of the DeSalvo Custom Cycling team.) But it also great seeing some old friends/new friends that used to race cross b/f life got in the way (Bryan, Stan, Chris G) 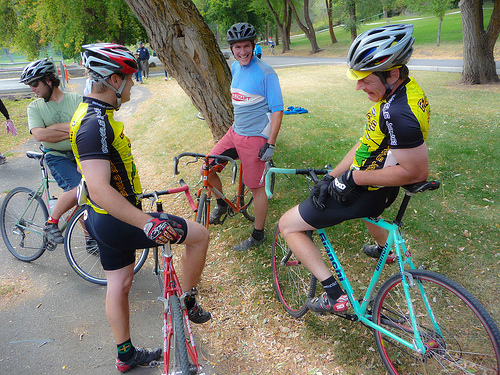 ...Dave DeRoche raced on his new DeRoche frame, cross frame/break-away frame. He was 2nd A race, 1st time in 3 years racing cross???? we think he is secretly racing under a different idenity, in a different state, or in the middle of the night.... or is he just that good?!
The course....sweet! FAST, FAST, FUN....up stairs, down stairs, duck there's the trees.....now up the GRASSSSSSS.....the slowest grass....i ride ss, and this was the killer part of the course...i felt if i was going any slower, i would be going backwards! I actually almost fell over as i was almost at a dead stop. For the most part the race was the smoothest, crash-free, almost no technical failures (ok i dropped a chain, only b/c i caught some air & came down too hard)....i was in cx heaven, i felt like my bike and i were made for each other ( actually love my bike!)....but where is that freakin' other gear! i got lost in the fun, joy of racing and having my friends cheer me on....I actually forgot, i was organizing the event.
Other fun stuff....Zach 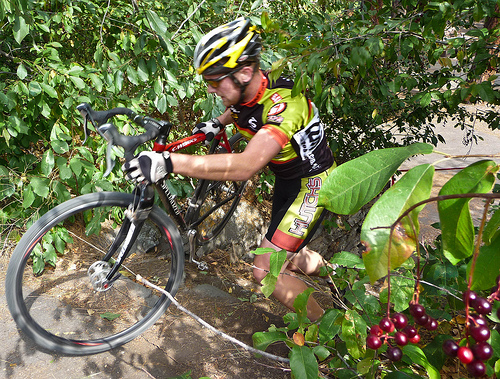 who was my left and right hands (and feet) had the race from hell. Well, it started off well, as he was the course leader (well he designed the course....so he may have had some advantage) but didn't want to win the Prime sponsored by CYCLOCROSS Magazine (we already have a subscription) so he slowed down to let Jake our teammate claim the glory! Dave DeRoche won the prime for the A's. ok....from there it got bad to worse (for Zach that is)....(ok, maybe not in this exact order) 2nd lap, chain dropping, 3rd lap broke a pedal, 4th thru 8th....bee sting, last lap-pinch flat, all in front of my sick girl, Zoe, cheering him on, asking him if "all is ok?", and "good job" Zach! all in front of my ex-husband (actually it was very cool he was there so my daughter could see us race) Despite the calamities Zach experience, he got 3rd B-Men (4th overall)....i think he might be ready to upgrade?
Zoe....the best part of the race, was having my daughter cheer me on, yelling at the top of her lungs, "I LOVE YOU MOMMY, SWEET DREAMS!" and "CIAO BELLA MOMMY!" ringing that cowbell as hard as she could.....right before i got to grass from hell, which made the crowd wonder why i was smiling????

After my race, i actually just sat back and watched/cheered the A's. It was great to see so many people have so much fun. That was the feedback i got, from the spectators, the racers, and even Zach, who is now sick....bummer as he's going to Interbike, sick.

Now it's Monday....get emails from strangers who read about the race in the paper (didn't get misquoted, but wrong phone#!) and want to know where the next one is so they can come watch, a friend's wife tells me her husband was there to watch, and now wants to race!(this will be his first race of any kind).

Reflection....yes it was worth it! inhale, exhale, getting ready for KFCX#2 next week! again, a fast, flat, fun course, very ss friendly!

Replies are closed for this discussion.