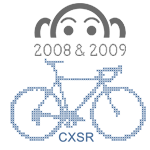 Saturday, January 10th
We're back to the place it all started. Dan Galvin Park at the Bennett Valley Golf Course will host CXSR #4! Once again we'll be there with live music, awesome prizes, super-fun CX course layout, heckling, beer and the whole bit. And we have something new...


$5 showers at downtown Santa Rosa's 5th Street Fitness for all event participants!
Just show up and let them know you're with Bike Monkey's cross race and they'll let you use their facilities after your race for a measly five bucks! THEY ROCK!


Saturday, February 14thCXSR #5 Championship Race has been MOVED
New location: Doyle Park, same as CXSR #1. Close to downtown, and full of super freaking fun drops, risers, runups and a bad-ass kiddie playground sand trap we'll make sure it's fun. Why the change? Juilliard Park is just too small. After a bunch of back and fourth over whether to host this event there we decided the size of the park and its difficult parking arrangements will make it challenging for participants and spectators. But in the spirit of being near downtown we're going to move to Doyle Park which is just a few blocks away.


The second CXSR #5 ends, the festivities downtown in correlation with the coming Tour of California are going to EXPLODE.
Save the dates--February 14th and 15th.
The gist of it is that you out-of-towners are going to fall in love with Santa Rosa, even if you don't have a date for Valentine's day. So save the dates, and plan on being here. Anywhere else will be, well to put it frankly--boring (no offense Anywhere).

This group does not have any discussions yet.

You need to be a member of CXSR - Cyclocross Santa Rosa to add comments!