It's been a while, there are about a half dozen incomplete race reports that I never got around to finishing. Pretty lame when you can't update the blog once a week, I know.

Well, I managed to find some late season form this weekend and win the 3/4 Masters races at the NBX Grand Prix in Warwick RI. It was definitely beyond my expectations to win both. Realistically I wanted to contend for the win, but would have been happy with Top 5s. It was a great way to cap off the season, and see the results from those cold early morning commutes pay off.


Day One: This course was more power friendly, longer lanes provided ample opportunity to open it up. The two beach sections gave the "runners" the best occasion of the season to stride it out . I had a 2nd row start that went ok, and I made up some more places on the first beach run. C.Todd and I did some work together and were able to get some distance. I kept my pace up high to chase down what turned out to be phantom riders. I incorrectly assumed there were one or two more guys ahead. With the 55+ race starting a minute before it can be a bit confusing. This turned out to be the "move". I went through the first lap in the lead and heard on the PA that I had a good gap.

I was able to extend the gap a bit on the 2nd lap, out to about 25 seconds at one point. I did have some thoughts pop up like "slow up, you've gone out too hard, you're going to blow". Fortunately that awful feeling of being well over your lactic threshold never overcame me. Instead I felt, maybe, just maybe, this getaway car will get away! 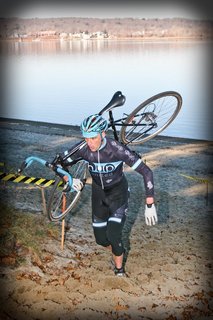 My excitement built on lap 3, and I thought that if I keep upright and do not have any mechanicals, I could win. That's a pretty big IF. A recent string of bad decisions combined with a front tire wash out at Sterling kept me from contending with the Top 5. The week before at Easthampton in the 3/4 race, I had busted my ass from a 5th row start to get to the front and into the Top 10, only to then breaking a chain. Other recent woes included busting a pedal the day before Sterling, and then snapping my left STI lever while warming up for Sterling.

With a lap and a half to go I knew it was my race to lose. I felt dialed into this course... running it out in the sand, sticking the right lines, sprinting out of corners, and powering on the pavement. It was actually fun during the race (opposed to reflecting on the fun afterward when I've recovered). I am not a gambling man, but I guess that is how one feels when they get hot at a craps table or blackjack. I was playing with the house's money!

The gap had come down a bit and I saw Eric Marro was still leading the chasers. I played the last lap conservatively but drilled the straights and the beach runs. Lucky for me I didn't pull a hammy either day, I'm pretty frickin' sore today! Finally... onto the pavement and down the slight hill to the finish I sat up and saw Robert and Mark up on the bridge cheering me on. I was hesitant to throw my arms up in victory because I mean, like what if there was one more lap? And I got caught, then I would be a joke of the New England cross scene. Coaches and Dads would be admonish their racers not to "pull a Needham", AKA "Pre-Mature Self Congratulations".

I came through the finish and locked eyes with the officials and confirmed that it was indeed over and I had won. I threw up my hands in victory. Of course my buddy Robert corrected me afterward that you are supposed to throw your hands up before you cross the line! 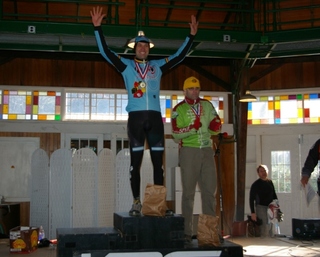 I had really wanted to win a 3/4 Master race at some point, and this being a Verge race made it all the more sweet. Very cool to have the cheers and support of teammates and friends. And so nice to hear the excitement in Gretchen's voice when I told her over the phone I had won. My own excitement in retelling the race caused me to miss the exit for 495N, so I stayed on 95N, and then jumped off 128 in Needham/Newton to grab a celebratory burrito at Fresh City. It was no Bueno y Sano but it was tasty nonetheless. Day 2 to follow (at some point). Thanks for reading.