The day dawned cool, almost crisp, and cloudy. I enjoyed a nice ride down to the venue from my house. By the time I'd gotten to PIR at around 10:15 am, the clouds were breaking up a little. By noon the sun had broken through and I no longer needed my long-sleeved base layer; I swapped in a lighter sleeveless layer instead. The course was mostly dry, with long stretches of gravel and pavement that I didn't remember from last year. What mud there was was dry and tacky. In short, this was a flat, fast course that would be perfect for roadies, and sort of awful for my singlespeed mountain bike. I toyed with the idea of swapping in a smaller cog but decided to leave things alone so I could power up the few short inclines on the course and feel like I'd accomplished something.

At the start line, I scanned the other bikes in my category; I was the only Master 45+ woman racing on a singlespeed; did the other women know something I didn't? Yikes. We were off, and I prayed that I would be able to hang on for 45 minutes.

I surprised myself. Yes, I still finished last in my category (not official yet but I'm pretty confident of the result); but this time the timing worked out so I could push myself hard and squeeze in a fourth lap before it was all over. Anytime I hit the mud, my bike handling felt fine. Anytime I was on pavement, I spun out (and wished I'd swapped in the smaller cog before the race). Anytime I rode through gravel I just told myself to keep pedaling, and while my rear wheel slid under me a couple of times I remained upright. Nicest surprise of all was how I dealt with barriers, especially on the flats. Obviously, the huge concrete slab was a challenge every time, but I forced myself to at least jog at it and all my dismounts there were timed pretty well. (Note to hecklers: consider placing the dollar hand-ups a little farther out from the slab so folks have time to remount before grabbing for them.) Because the course was run in reverse of last year's route, the strongest and most agile riders today were able to bunny hop up to the slab and back down the other side. (Note: I did not see any women attempt this but then I missed most of the Pros/A's race just prior to mine. Several junior men made it, and many singlespeed [men] did so as well.)

Except for the two barriers on the steep uphil, where the cheers of my male teammates helped me get up and over that section every lap, I managed to run over every other barrier -- and the two barriers out in the back section were awesome! The hours I spent in late summer/early fall practicing nothing but mounts and dismounts seem to have paid off. I'm sure I was still slow as molasses, but when I suitcased my bike over that set of barriers each lap it felt almost like flying, and I felt the closest I ever have to a real cyclocross racer.

Team Slow notes: I got to meet the newest of our ladies today -- Suzy is an impressive rider and races Womens' Master 35+ B. Erinne looked so ridiculously strong today; her pedal strokes were smooth and powerful and her long red hair was just flying out the back of her helmet. I saw her a couple of times on the course and she must have lapped me more than once (I don't yet know how many laps each of us completed). I saw Kristin early on; she passed me and I don't remember if I saw her again. I got passed early on by Suzy as well -- another strong rider with great form on the bike.

I struggled, as I knew I would, on the sections of the course that were long, flat and paved -- ick! ugh! -- and felt stronger on the short, punchy climbs and the steep switchbacks. I never managed to get the hang of the 180-degree turnaround in deep gravel -- and on an incline! -- and lots of women got hung up here. The key, as best as I could observe, was to go in fast and take the turn rather high But with so many women on the course there was never enough room for me to get my momentum up enough to make the whole turn, and I got hung up halfway around each time, forcing me off my bike. I couldn't decide whether this or the two uphill barriers were the least enjoyable parts of the course for me.

Because of the dry, warm weather, the off-camber section at the end of the uphill barriers was almost a non-factor. According to various reports, today was the first time the PIR course has been this dry since something like 2002. And while I would have liked to challenge myself in the mud, I felt really good about managing to pull out four laps on a course that really wasn't my cup of tea.

(Me and teammate Erinne before our race. We were both smiling afterwards, too.) 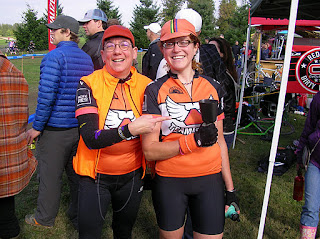 Next weekend: Washington County Fairgrounds, Hillsboro. Another run through the manure-tinged mud and the sheep barns. I am hoping it will rain.

Comment by anthony sands on October 22, 2011 at 6:06pm
can't make to hillsboro, raced in vancouver today. It was fast and flat as well. I geared up two teeth and gave a go, plus the sand was my friend today.

Thanks Anthony! Weather report so far indicates partly sunny skies and highs in the mid-60's -- more of what we had at PIR. That will make the Washington Co. course flat, fast and dull for bmx wannabes like me. (sigh)

Hope to meet you in person in Hillsboro -- good luck!

I was bum'd there was so many straights too, that was no good with my 34-18 gearing, should have geared higher myself. I still managed 25th in beginners, but I was beat on the flat sections by just about everyone. More hills, more mud, more run-ups, more crappy weather please.