I had a good weekend of CX racing at the UCI KTR Double Cross in Springfield Twp this past weekend (Sep. 21-22, 2008) at the Springfield County Park.

Day 1:
The start of CX season is always very nervous. You have the mix of roadies coming off of a long road race season. Then you have some MTBers continuing there MTB season (possibly training for Iceman). CX racing is such a hard/suffering form of racing. And when you mix in the roadies and MTBers all together, you sometimes get a hectic mix.

As I did last year I chose to forgo a lot of mtb racing in the summer and focused on doing multi-sport (3 duathlons) in the summer. I had planned on doing a half marathon in VA Beach during Labor Day weekend, and had trained most of the summer, but it was hard to justify such a trip b/c money was tight. Good thing I had been regularly riding with the Dearborn Saddlemen for the past month. Their Wed night rides provided ample opportunity to "stretch out" the legs and lungs :twisted:. Add to that the running I had done to prep for the (planned) half marathon, and I felt almost as ready as I could possibly be.

Forty (40) riders made it out for the Men's "C" (CX Cat4) race and I started out of the second row. I got a pretty good start and got decent position into the first lap. From the whistle, I made it from second row up to about 7th or 8th. That first lap, my goal was to ride 90% to close to full-bore to make sure I could stay up near the front and avoid traffic and mishaps with slower/newer CX racers. I felt pretty good as I was able to ride, negotiate the barriers and run-ups, and manage to stay out within sight of the front group for that first lap. I know my HR was near (and over :lol: ) max for the whole first lap, but I still felt like I had enough in me to keep myself in the middle of field.

By the start of lap two, I planned to back off the pace a little to make sure I could have enough in case I needed to sprint out someone on the last lap. I did just that and almost on cue, a good 3 or 4 riders past me within the first section up to the first barrier. I managed to bring up the pace and keep myself within sight of them and away from other racers coming up from the back.

On the third (and what turned out to be final) lap, I began feeling like I had burned too much. The back half of the course weaved through a trail in some trees at the Springfield County Park. Coming out of the trees, I got passed by a couple more riders. At the time I thought/felt I was riding within the top 20 and was worried that I might get passed by more riders. I was almost to the point where I felt blown up, but I kept pushing to try and keep my position. I had set a goal to be in the top 20. Last year I was an embarrassing 28th out of 33 finishers. Coming up the final run-up close to the finish, I ended up having to dismount because my biking legs were pretty much spent. Remounting I gave what I had left to keep in front of a small group of riders who were quickly approaching. Luckily that run-up was steep enough to keep them at bay and I had enough left to hold them off to the finish. At the line I ended up 13th (out of 40). Definitely made my goal!

Day 2:
The second race, I held on to hope that I would be able to better my finish. Last year on the second day, I was totally spent and ended up finishing behind a couple of the women's "C" racers (who started 1 min after the men). I made sure to do some good recovery work after the first race this year, and was feeling pretty good at the start line for this second race. As usual, they switch the course around a little bit for the second day, and I was a little concerned because this made it so that there seemed to be more climbing.

Thirty six (36) riders took the line on day 2. Again I started out in the second row. At the whistle, again I made it from second row to about 8th or 9th. My game plan on this day, though, was to not to go out too hot and not leave enough for the rest of the race. I made it through the first lap feeling pretty good and only losing 1 spot to a Bissell rider. For the next 2 laps, I felt surprisingly good and pretty calm. I had a close, back-n-forth, race with a rider on lap 2. But I was able to shed him by lap 3. A few times I would hear riders coming from behind, but I managed to up the pace when I needed to and keep them at bay. On this day, I was able to ride the final steep run-up and finish pretty strong in 10th. My first ever top 10! 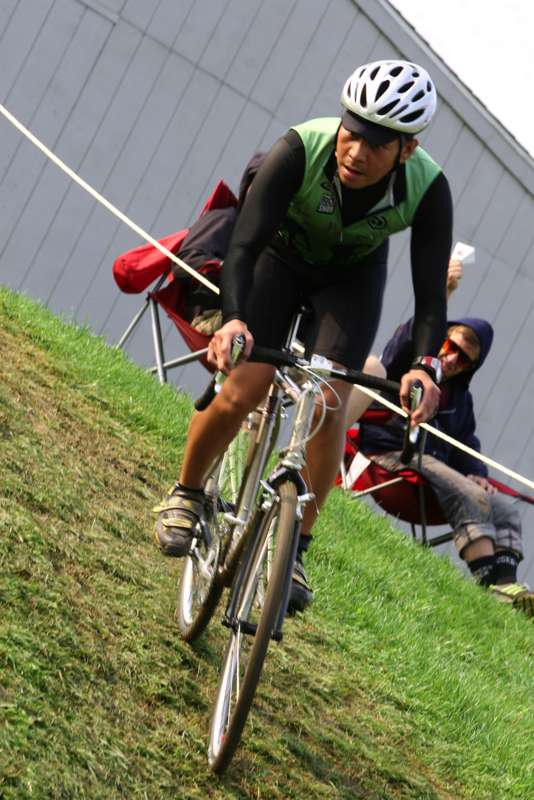