Over the past few years I've learned that not everybody shares my affinity for Candlestick Park. I used to live in Portola, and the stick was a place that was rideable to from my house pretty easily, and had dirt. I have always liked the layouts and the courses that I've raced there. Although I've not always enjoyed how bumpy and sandy it can be, I've gotten my best placing ever in a cross race there.

First I want to give a shout out to young Isaiah Rapko, who is killing it this year against kids that are a couple of years older than him. He's 4 for 4 in races I've seen him in this year, and he was rolling before that. Great Job Isaiah!!!! 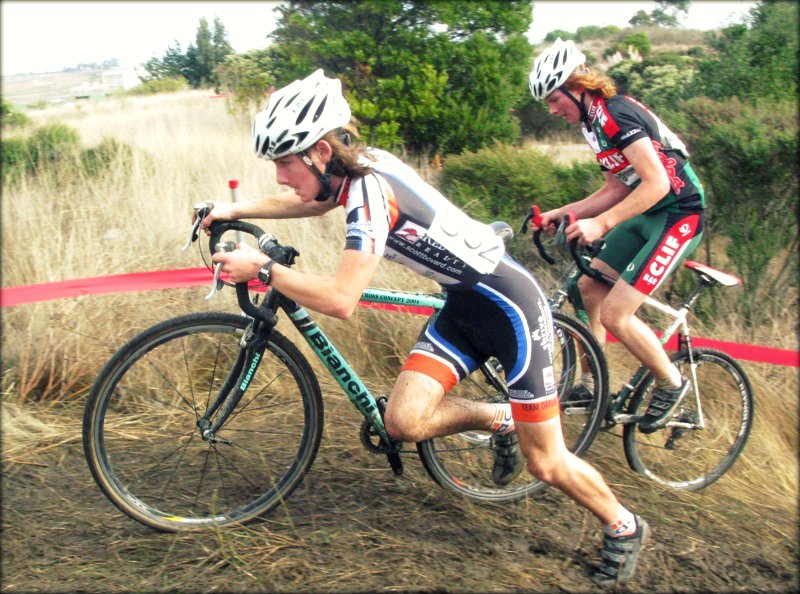 This is a really flat course that I've seen people race touring tires on (in dry years, not yesterday). Not a bad idea as it's a landfill, and has seen millions of parties out there, so the added puncture/ pinch flat resistance can be beneficial. Personally I'd prefer to ride fat tubulars there. Unfortunately, it seems that the new Fango's and Conti's ect...aren't scheduled to be available 'till pretty much past the meat of cross season. Plenty of time to glue them up for next year....great. I choose to ride my training wheels and tires for this race because I am digging the IRD cross tire as a front, small block 8 as a rear combo. I run beefy thick tubes for added pinch resistance. I opted away from my 2 season old Vittoria tubies because they are beat up, and during my race the course was pretty slimey, at first. The course changed dramatically throughout the day. in the morning there was a squall right before the C's race to make everything nice and wet and slimey. When I hit the course, during the allotted times, it was run up everything except the first berm (and people were running up that, too). The course was great in the grassy sections, and had some corners that needed finesse throughout. I went back out right before my race, the 3rd of the day. The course had gotten a bit faster, and more rideable. Cool. I started in my assigned place in the back of the field, and got ready for the inevitable front end jammy start. Due to the course design, the field got to enjoy a pretty wide open start, and get lined up before the first choke point. I picked my way through some folks, some guys picked their way through me, and I settled in with a pretty good first lap. I was glad to have people around me, I wasn't getting blown out the back into the 45's. I was able to compensate some, picking good lines and sticking them and passing guys. When we got to the open end of the course, I'd get passed. I couldn't accelerate on the pavement. I could just maintain and try to get my hr under control. Then we hit the dirt and I'd start picking my way past guys. It seemed like the race went this way pretty much. Some of the faster guys would eventually gap me to the point where they stayed in front of me through the dirt, some guys I passed, only to have them pass me then back again. I spent much of the race w/ my team mate Sassan, and a guy from MIke's Bikes, and a couple of others. The course was getting tackier, bumpier, and potentially faster. Stuff that you could normally ride up, except for this morning, was becoming rideable and corners were getting nice and carved out w/ great traction. During the middle of the race I faded and went into survival mode. The middle couple of laps were pretty dark, and really, a blur. I regained consciousness w/ 3 to go, only to slip back into the grind. W/ 2 to go I was back in the saddle and racing my bike, I devised a plan to make the best of my current position. I think I did get passed by a guy (in my group, Andreas maybe) on that second to last lap, but held pretty well. On the bell lap, we hit the first left-hander and I picked a tight line that my tires held, shot through a group of about 4 guys, and determined to make it stick. I put my head down and drove that last lap the best I could. I was getting hunger pains, and I was thirsty and I only had a few more minutes to hurt. My main objective was to finish in front of Sassan, and the Mike's Bikes guy (Daniel), small goals but goals none the less. In what is now a trend this year, I put in a last lap that was probably my best lap. It felt the best. Once we got to the pavement, my weakness all race, I got into a nice big gear, and got on top of it as best I could. I wanted to hold off Daniel w/o having to sprint out of the saddle. I was able to do that, w/ him right on my wheel. I may have been aided by his indecision over which side to try to come around me, but I was in a gear that I could stand up on if needed. Thank goodness I didn't, it would have been an ugly sprint. Anyhow, it was good racing w/ you, dude. That was totally fun. Thanks to Tom and Alec Simpson, Daniel, and the rest of the Pilarcitos crew, great race!! After my race, I fired up the grill, and we got a pot of chili going, sausages, beers...It was cool, but ended up being a really nice sunny day. The course kept drying out, and by the later races, those euro-centric tubulars would have probably been the kind tires. The largest run up, about 10 feet, became comically rideable later on, with a nice hard sticky path going right up it. I don't know that first hand, however, as I was performing my tent duties. I'd love to hear what people thought about the course who raced at different times. I know the old and older A's that followed us had a much different track than the one we started on. 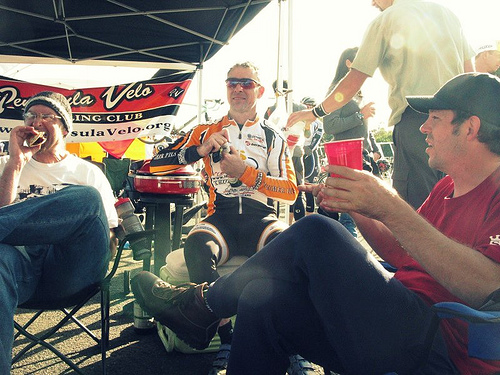