The venue that is Soquel High School is top notch, and the Velo Bella and Surf City crews put on what I think was just about the coolest bike race I've ever been to.

The course was excellent, a bike riders' course. A fit bike riders' course, but one that favors confidant riders. I wouldn't say it's really technical, just that you are not off the bike very much. A ditch, a run up and that's it. Other "run ups" were completely rideable, and reminiscent of the small pitches we'll be seeing next week at Candlestick. A low enough gear and keep your weight back so you don't spin out , boom.

On the first lap, of course these were run ups but once the fast guys got out of our way, it was pretty smooth. The 2 grass sections were total burners, I thought. I never left the grass w/o a jacked up heart rate. I love the whirly. There is an opportunity to get to know your side knobs, and love them. The rest of the course was a fun mix of terrain. Fast pavement turns in back of the school, gravel road/ turns, a baseball infield w/ an exit turn that begged for bmx style power slides, a good hard run up...yep, great job. I love racing this venue, and the folks in charge really know how to maximize what's available.

I raced the B's because my ride isn't yet 35. So, I get there and we have: George Thoma, Ed Lai, Sassan Pazirandeh, Jamel Freeman, Paul Musso and myself. Cool!! Also, Isaiah Rapko is racing at the same time as us, which was cool too.

I start in the back, where I belong, and then let the lap unfold. As things clear out, fast guys jump, slow guys drop, I found myself in a good rhythm, and riding in some company. I got the best warm up so far, by riding the hell out of the course, and doing small laps of the course during the kiddy race (empty course!). I heard tons of shout outs from what seemed like many areas of the course, that was great, thanks!! On the first lap, Bjorn Fox had made up the 30 seconds easily, partly due to the traffic jams at the first couple of choke points, he jammed past us just as we hit the baseball field. I heard a "I'm right behind you Geoff", I wasn't exactly sure who it was, but I didn't want to cause a delay if it was Isaiah. I can't "help" him, but I can also not impede him. So on the exit turn, I did one of those bmx power slides, and cleared out a lane for Isaiah, or whoever it was. It was Isaiah, and when I saw him I slapped him on the back and told him to go. He got right back onto Bjorn's wheel, and there is a photo w/ Jamel and me in the background showing that he was able to get around him in the lower field/ run up section. 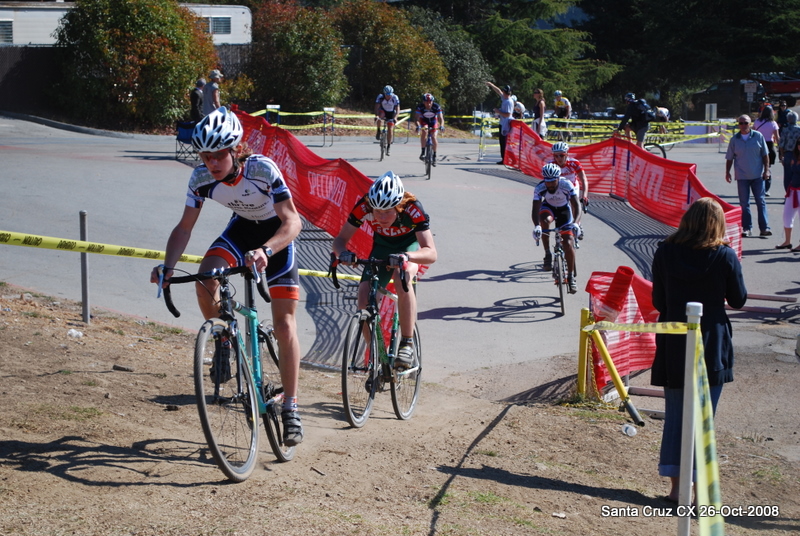 Then he went and won the race, but I never saw them again after the first lap. So the race goes on, I'm w/ a BBC guy, and a plain black kit(pbk) guy for a few laps. We seem to be making pretty good time, and rolling along nicely. We got up to where Ed, Jamel, and Sassan were, and then I was with them the rest of the way. BBC got a beer one lap, and passed it on to me, then I passed it to Sassan, I don't know what happened to it then. After the beer, I felt pretty good, I put in a pretty hard lap, and was making time on the guys I'd spent most of the race with, then I started to not be as fresh. 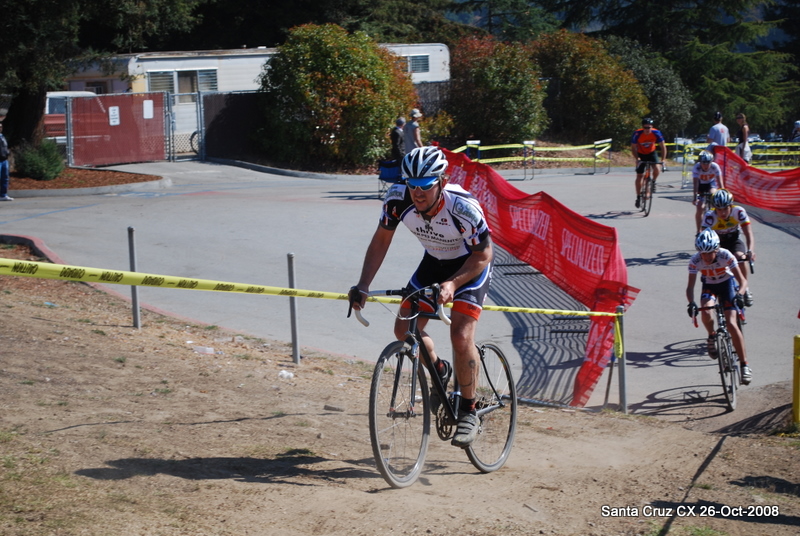 Sassan, Ed, and Jamel all got back around me. This was cool though, because people were shouting "Go Team Oakland Train!!" It was just reall cool to actually be around my teammates during a race, even if we were in the 30's or 40's or whatever. I don't kow what my placing was, yet...but I know that w/ 2 to go I was hurting so took a "recovery" lap. I hung w/ the boys, figuring on just maintaining till the second half of the next lap, then we could jam on it and whatever happens....well, we got lapped on that last lap, right at the run up. So when we came across, we were told we were done. So Ed and Sassan finished in front of me, and then Jamel was right behind me. I don't know if we were unbroken or not, but it was pretty close to a 4 man Team Oakland sweep of the, what, mid 30's or something? Whatever, this was such a fun race, it doesn't even matter. 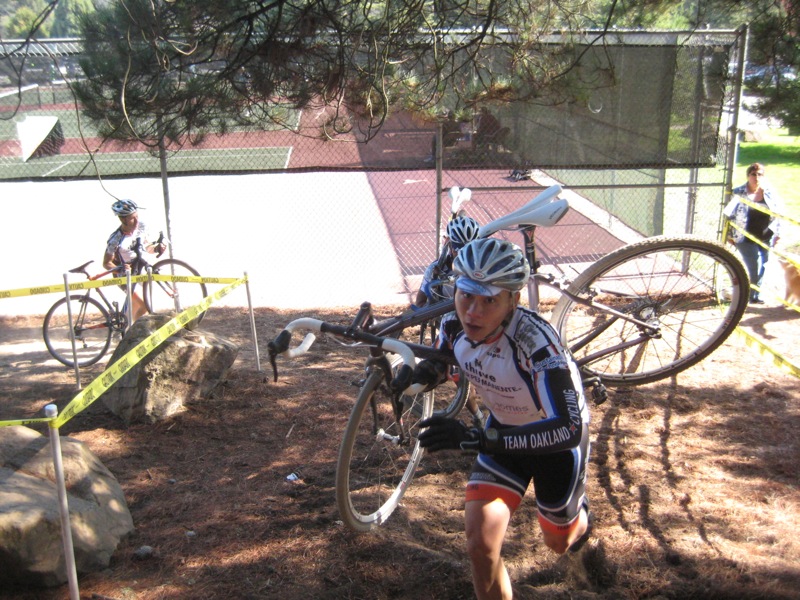 The traditional Halloween costume race was the best one I've ever seen. Tons of great costumes, but the things I liked the best was the running of the bulls, 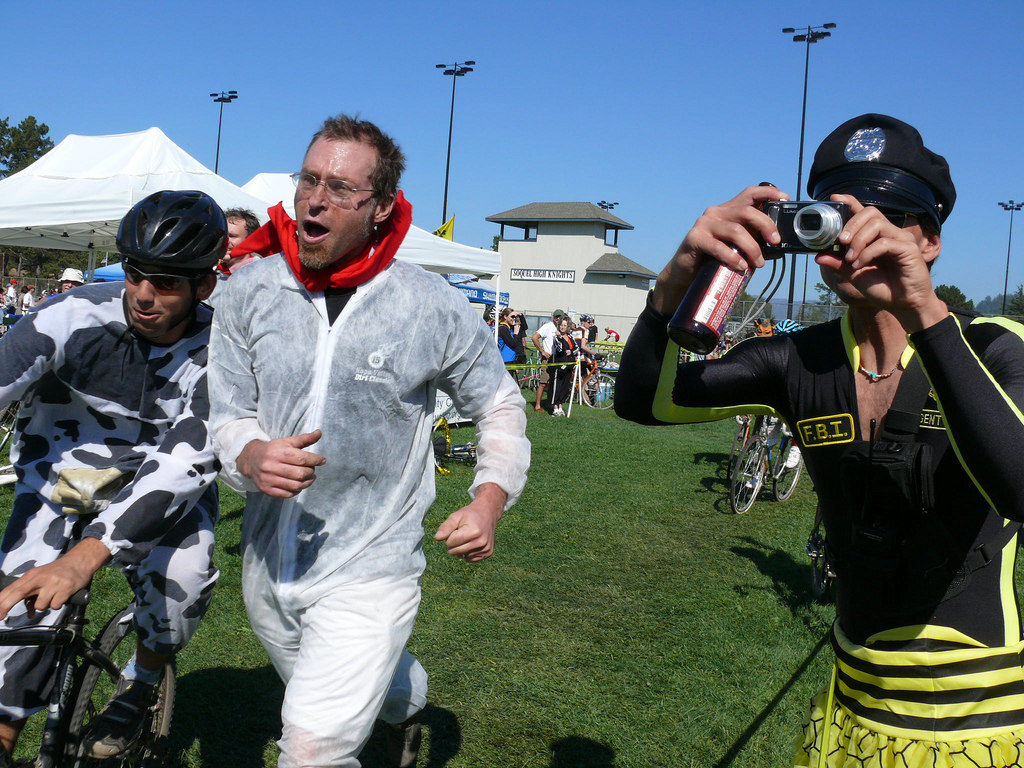 and the 10 minute Lucciadore wrestling match at the finish line. Funniest thing ever. 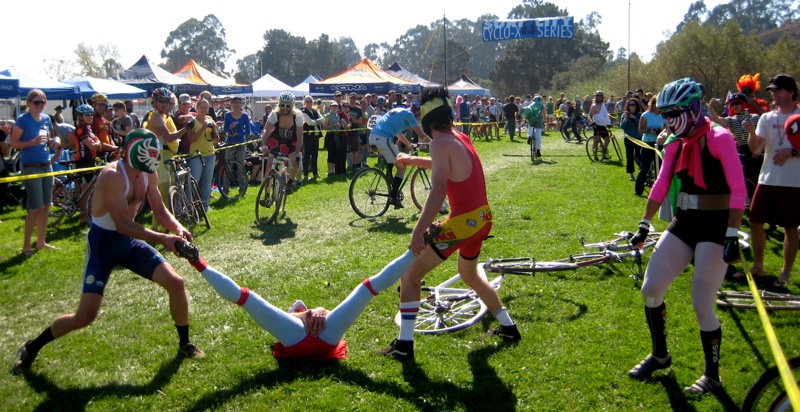 Comment by Ryan Rickerts on November 11, 2008 at 5:30pm
What would it cost to get those wrestlers at our finish line? Looks better than a bubble machine and windmill combined. Well, almost.
Did the riders have to bunny hop his crotch? Did someone come up short?

Comment by andrew on October 27, 2008 at 10:38pm
nice write up. you'd be an awesome contributor to some norcal reports for our site! let me know if you have any interest. we can help with photos - and norcal needs some love! glad you liked our running of the bulls! that was a blast.