The denial is over. Me and cross were more than likely a match made in heaven, but I guess I was in denial. Since my “lifestyle change” in 2006 (the losing 100 lbs and getting back in shape thing) I flirted with running and with triathlons and duathlons. And I had a blast. But there was always “something” missing.

Different circumstances and events have leaded me to cross in the past months, and it is finally all coming together! I currently have my favourite bike mech starting to… Continue

Hi...I recently read a post about unattached riders and wanted to let everyone know we are starting a national cycling team for road, mtb & cross. Please visit www.deathrowvelo.com for more info and to sign up.
We also will be running an ad campaign with Cyclocross Magazine so you may see some banner ads on this and their main site soon. As well as some product spotlights for our new cycling clothing line.
I am a roadie but getting dragged onto a cross bike this season...gulp...by… Continue

Making a come back

Well it has been 1 month since my open heart surgery, and I have been released by my cardiologist to go ahead and start my rehab on monday, this consists of me going to the hospital and wearing a heart monitor and working out for about 45min to an hour under the watchful eye of the doctor there, making sure that there is nothing unusual happening or that I do not have an episode! I have also set up my bike on the trainer and plan to ride it for about a half an hour getting my heart rate up to… Continue

I finally bought a Motobeacans Fantom Cross. I spent $799 from bikesdirect.com. I have traveled about 50 miles thus far, and have a few things to say:

1) The bike is pretty good. I got the 64cm model, and don’t have any rubbing on my shoe like allot of the other riders are saying.

2) I bought some plastic strap-in pedals. I thought that I had them secure today (my 2nd ride). I was feeling SuPer pUmPeD this afternoon, and started slaying away at the miles across rural CA.… Continue

CX season is officially on in Eagle, Colorado, come out and enjoy the festivities... 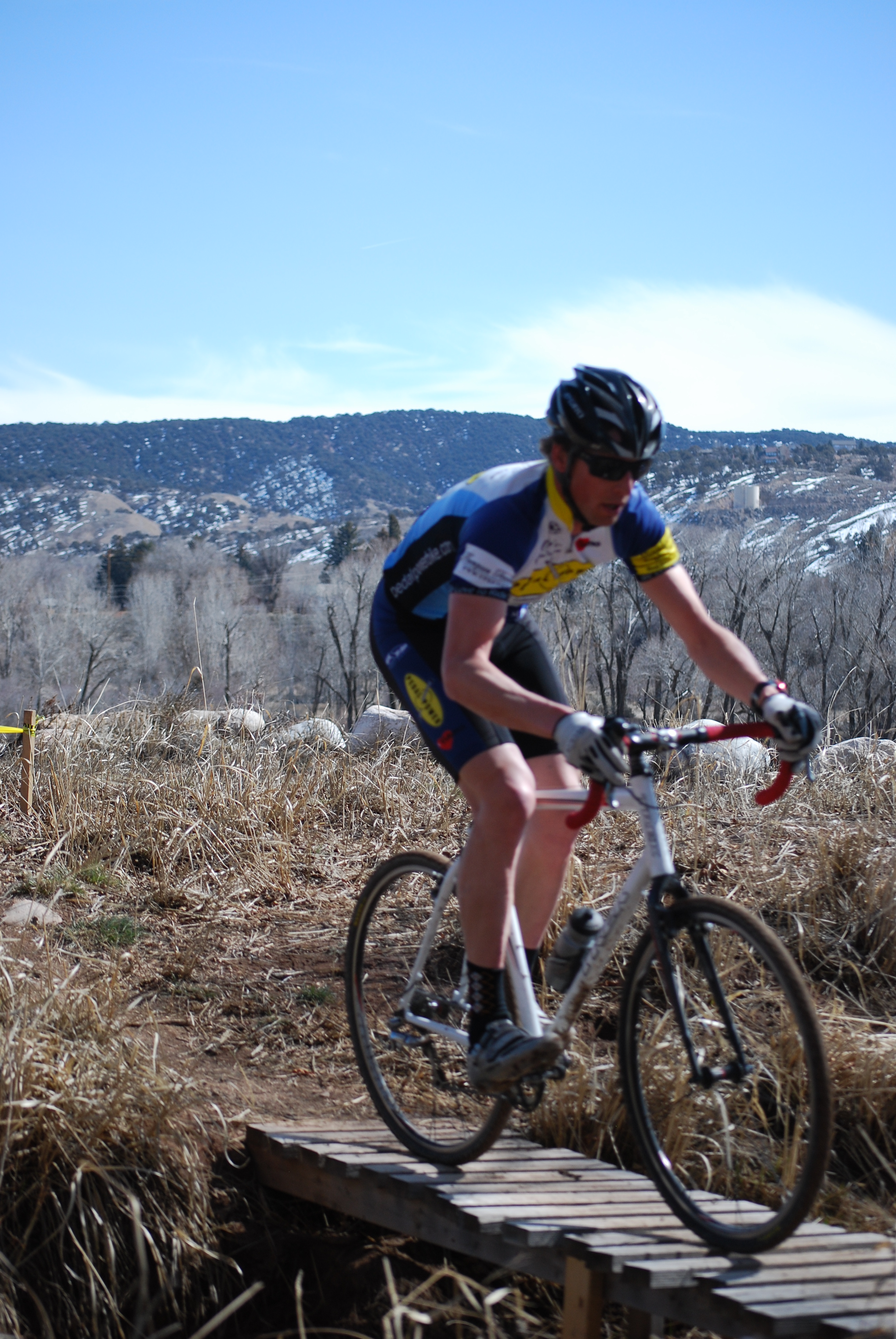 there will be 3 in the hudson valley region of NY in 2009. 2 in Newburgh. and 1 at tymor park (dutches county). these races are already listed on bike reg. check for dates.

The World Championships are over, the US Juniors did great, KFC rode superb, and the Men fought valiantly. Now what's a CX racer/fan to do but to train for September.

* denotes written by a bike crazed dufus with devil horns

Nokian Cyclocross Ravagozzi Tires (2). Folding. 700 X 35. Brand new still in package. Great mud tires.
$40 bucks shipped. Paypal good. I can email a pic if you don't know what they look like. Thanks, Rob

I have a couple of items that I am looking to sell. The first one is a set of Bontranger Carbon Aero tubular wheels. I've used these on my time-trial bike. These wheels are in great shape. They have a Campy cassette on them now, Tufo on front with Conti Sprinter on rear. Wheels come with wheel bags, skewers and valve extenders. $1700 retail new. Looking to get $500 plus shipping. The second item is a 2008 Redline Conquest Pro frame with a Origin 8 full carbon fork and Ritchey WCS headset. The… Continue

‘Last Chance Cross’ took place Sunday Jan 25th, as the last race in So Cal AND the finale of the Cross Fever Series. The event took place at Cornerstone RV Park and Picnic area affectionately known as the Flying B Ranch in Black Star Canyon, CA. The ranch presented amazing terrain with world cup potential. Race director and long-time Pro MTBer, Michael Lee brought his experience along with support from World Champion mountain biker Brian Lopes (Oakley/Ibis) to create a course with plenty of… Continue

Fresno CA home of the funnest night race there is, check it out at www.sickpromotions.net, in our 5th year now, Don't miss it!!!

Paddington is Cyclocross Santa Rosa's Mascott for 2009 and he has a chance to move on to bigger and better with Bissell this coming season. Cute and furry, you might think of him as a simple pet. But Paddington is the reason why CXSR is so successful, and he deserves your vote in our campaign to get him a superhero's contract!

Paddington, dirt-crit observer and charmer needs your help getting a job as the poster-dog for Bissell!… Continue

CROSS FEVER HIT THE CENTRAL COAST -- SUNDAY JAN 11th - CHECK OUT THE PHOTOS & RESULTS HERE!!!
Set at the Beautiful Talley Vineyards in Arroyo Grande, racers and bike-enthusiasts came together to experience the debut CX event for SLO County, including wine tasting, BBQ, and some really fun racing on a course that kept you on your toes!

I have set up courses forever, and when I see pictures of the cross racers and what they have for set up it makes my blood boil whenever I see pictures of other races in other areas. Kansas Cross Racers should welcome what they get at a race. Look at the pictures with courses with a few taped turns, cones only, and or wire flags. Wow! We always make sure our courses are well made.

Sunday, January 4th was race #1 of the inaugural SoCal 'Cross Fever Series -- all events taking place in January 2009 and showing off cyclocross racing at its finest on some of the best courses southern/central California has to offer! Sam Ames and the Kern Wheelmen Bicycle Club kicked off ‘Cross Fever with the classic Hart Park CX event in Bakersfield, brought to you by Action Sports, Glinn and Giordano Physical Therapy,… Continue

Come to one, come to all... the 2009 SoCal 'Cross Fever Series will take place each Sunday in January and will debut 3 brand new events across the Southern California region. The series kicks off Sunday, Jan 4th with Hart Park Cyclocross and the classic Euro cross course in Bakersfield CA! The Hart Park venue has been hosting cross for 18 years with its grass downhills, wide open track and challenging run ups. Brought to you by Action Sports, the Kern Wheelmen and Kern County Parks and… Continue

nice job to all at nats and thanks a million to Renee, JP and everyone that makes it awesome here in WI

Can not wait to get back to cross, Sunday should be a blast from the past. I am looking forward to see if the boat ramp returns to the course. It may be flat but sand and mud mix well together to bring STICKY stuff in the forks, cranks, etc.. Get to take pictures again, this is going to be fun.