CX Race #2: Lottenhulle
My second race in Belgium was last Saturday. I scouted the race course on the prior Wednesday, so I knew roughly what I was in for. Two-thirds of the course would be on a gently sloping pasture, the other part of the course was flat, puddled pasture. Two short paved sections linked the various sections or the course.

The day before the race I picked up my newly shod race wheels. Peter Stevenson, a former pro crosser from Northern England and the… Continue

It's been a while, there are about a half dozen incomplete race reports that I never got around to finishing. Pretty lame when you can't update the blog once a week, I know.

Well, I managed to find some late season form this weekend and win the 3/4 Masters races at the NBX Grand Prix in Warwick RI. It was definitely beyond my expectations to win both. Realistically I… Continue 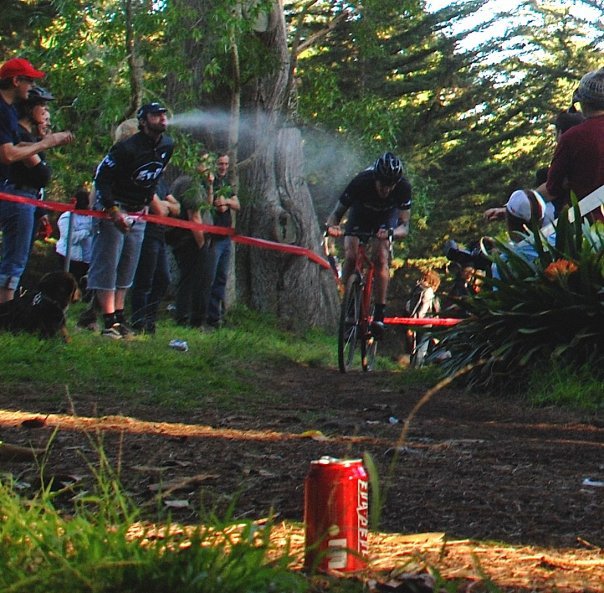 or blows the Anheuser Geyser.....people listen.

Especially other Evil, trying to ride......

Finally. Got the W. I was starting to think that I might go all season without tasting the top of the podium, but now I worry no more. Saturday, Fayetteville, the Freak set up a great course (great because it didn't play to my weaknesses much) and was kind enough to schedule the SS and CX4 races back to back, leaving me just enough time to drive straight to Louisville for my gig. I was thinking Friday night that I might have overdone it a little bit with the heavy Tuesday night ride and the… Continue

Looking for Groups in Southern California

Have been interested in cyclecross for a while.. any intermediate training groups in the area..

Where my blogs are

I most likely won't be doing any blogging here but if you want to read any of my regular entries they are at:
The One Eyed View from the Saddle
http://zekesbiken.blogspot.com/

Man does it get dark early! Running out of places to ride where there are lights, i need to find park with a hill that has lights on at night. Montrose does not, i would need a very big(heavy) light on my bike to make easy to see. So i guess i will look around.
If anybody knows of a park on the northside with a hill and lights let me know.

Over the past few years I've learned that not everybody shares my affinity for Candlestick Park. I used to live in Portola, and the stick was a place that was rideable to from my house pretty easily, and had dirt. I have always liked the layouts and the courses that I've raced there. Although I've not always enjoyed how bumpy and sandy it can be, I've gotten my best placing ever in a cross race there.

First I want to give a shout out to young Isaiah Rapko, who is killing it this year… Continue

Got there really early today 'cause I wasn't sure which class I was going to race. My leg was still really sore from some muscle spasm issues Friday night but when it came down to it, I just couldn't move down a class. Fitness wise I am still a bit out of my league in the B class. As far as handling my bike, dismounts, getting back on the bike I feel great, just don't have the endurance to hang with the mid and top riders in the B's.

I like to watch the C race when I get there early.… Continue

I guess this is the weather we always talk about racing in right? How it would be so cool and epic to be able to race in the wind and the rain and the mud. While we didn't exactly have rain, and the mud really wasn't that difficult, we sure has heck had the wind today. The wind coupled with the rapidly dropping temperatures made for an interesting pre- and post-race. .


Remember Montrose last year? Compared to how it felt today, Montrose was downright balmy. Maybe it was just… Continue

Argh, it's Thursday which means it is almost the weekend, which means it is almost RACE DAY! I still kinda find it funny that I am slow and my goal is not to be DFL in the B race yet I can't wait for each race to get here. I wish there were more opportunities to race from week to week. The rapid decent into winter like weather is probably not helping. It takes a lot more motivation to get out and ride (let alone get up at 5AM and commute 12 miles in the dark while it is 28… Continue

I started out great. From the gun (err... whistle), I got up into the lead group and sat in about 5th. The first lap I felt pretty good and was working well staying in the back of the lead group. Unfortunately, that didn't last long.

I (stupidly) decided to back off the pace a little on the second lap because I felt I was going a little too hard and I wanted to have something left for the 3rd (and last) lap in case I needed to outsprint someone for a top 10. Well, deciding to back… Continue

I had a good weekend of CX racing at the UCI KTR Double Cross in Springfield Twp this past weekend (Sep. 21-22, 2008) at the Springfield County Park.

Day 1:
The start of CX season is always very nervous. You have the mix of roadies coming off of a long road race season. Then you have some MTBers continuing there MTB season (possibly training for Iceman). CX racing is such a hard/suffering form of racing. And when you mix in the roadies and MTBers all together, you sometimes get… Continue

The cheyenne cycling club is putting on the final of 4 cyclocross races this saturday, Nov 1. The entry fee is only five dollars. The B race starts at 4pm and the A race is at 5pm. It is at Clear Creek Park in west Cheyenne. For directions or info, post a comment.

The venue that is Soquel High School is top notch, and the Velo Bella and Surf City crews put on what I think was just about the coolest bike race I've ever been to.

The course was excellent, a bike riders' course. A fit bike riders' course, but one that favors confidant riders. I wouldn't say it's really technical, just that you are not off the bike very much. A ditch, a run up and that's it. Other "run ups" were completely rideable, and reminiscent of the small pitches we'll be… Continue

This course has quickly become infamous. This years' edition was as miserable as previous, but a better course I thought. I got there early, set up, and tried to get my number and a warm up in. I did the best I could in my sweats w/ about 40 minutes of riding time. I had to stop and stretch periodically, so I could get on and off the bike. It was a cool overcast morning, perfect racing weather. I started feebly in the back of the pack, actually felt good on the run up, and then preceded to get… Continue

Had another fun race. It was nice to get out on the new bike and put it through its paces. I might be sold on gears (at least for some of the time:) The Kona Jake is a great bike, super comfortable, stable, can't say enough. There were 38 racers in the B's and I was in the middle of the pack going into the first barrier section. I have been pretty smooth on and off the bike this season...until that first section yesterday! Stacked it into the barrier. Looked like a DOUCHE lol. By the time I got… Continue

My trusty old Specialized finally crapped out on me. Cracked the frame. With a race coming up this weekend and having missed commuting ALL WEEK I needed something... and fast! Called all the local shops, checked out all the sites, even went to fleaBay! Nothing. Cross Checks all sold out till Jan. and kinda pricey (for what I want). Everything was either too much $$$ or not in stock. I happened to check my local mountain bike assoc. website's classifieds and found an 08 Kona Jake with less than… Continue